Air Pollution linked to one in six deaths worldwide

Air Pollution has been linked to nine million deaths worldwide in 2015, a report in The Lancet has found.

The research, published in The Lancet medical journal, found that the overwhelming majority of pollution-related casualties – around 92 percent – were found in poor or middle-income nations. And in countries looking to industrialize rapidly, such as China, India, Pakistan, Madagascar and Bangladesh, pollution was connected to as many as a quarter of all deaths, the report said.

Air pollution had the biggest impact, accounting for two-thirds of deaths from pollution.

Brunei and Sweden had the lowest numbers of pollution-related deaths.

Most of these deaths were caused by non-infectious diseases linked to pollution, such as heart disease, stroke and lung cancer. 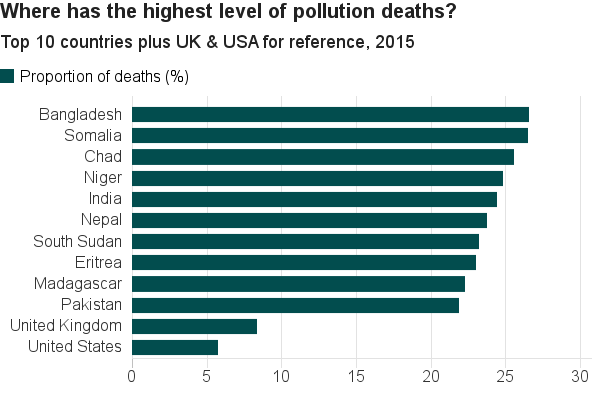 SOURCE: The Lancet Commission on Pollution and Health

The biggest risk factor, air pollution, contributed to 6.5 million premature deaths. This included pollution from outdoor sources, such as gases and particulate matter in the air, and in households, from burning wood or charcoal indoors.

The next largest risk factor, water pollution, accounted for 1.8 million deaths, while pollution in the workplace was linked to 800,000 deaths globally.

About 92% of these deaths occurred in poorer countries, with the greatest impact felt in places undergoing rapid economic development such as India, which had the fifth highest level of pollution deaths, and China, which had the 16th.

The Department for Environment, Food and Rural Affairs (Defra) said a £3 billion plan had been put in place to improve air quality and reduce harmful emissions.

A spokesman said: “We will also end the sale of new diesel and petrol cars by 2040, and next year we will publish a comprehensive Clean Air Strategy which will set out further steps to tackle air pollution.”

Mike Hawes from the Society of Motor Manufacturers and Traders said the latest diesel cars were the cleanest in history. He said the biggest change to air quality would be achieved “by encouraging the uptake of the latest, lowest emission technologies and ensuring road transport can move smoothly”. 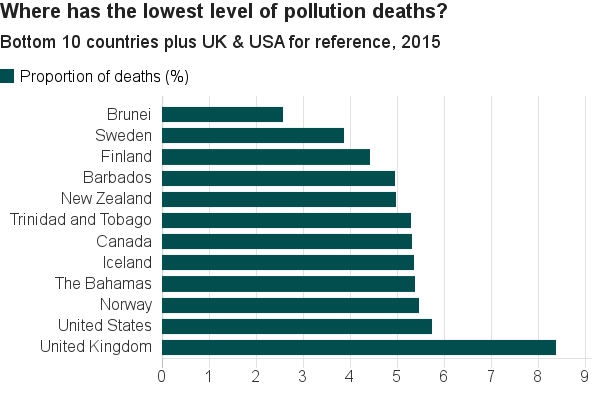 SOURCE: The Lancet Commission on Pollution and Health

The authors said air pollution affected the poor disproportionately, including those in poor countries as well as poor people in wealthy countries.

The research was carried out by around 40 international scientists, using data from the Global Burden of Disease Study from the Institute for Health Metrics and Evaluation at the University of Washington.