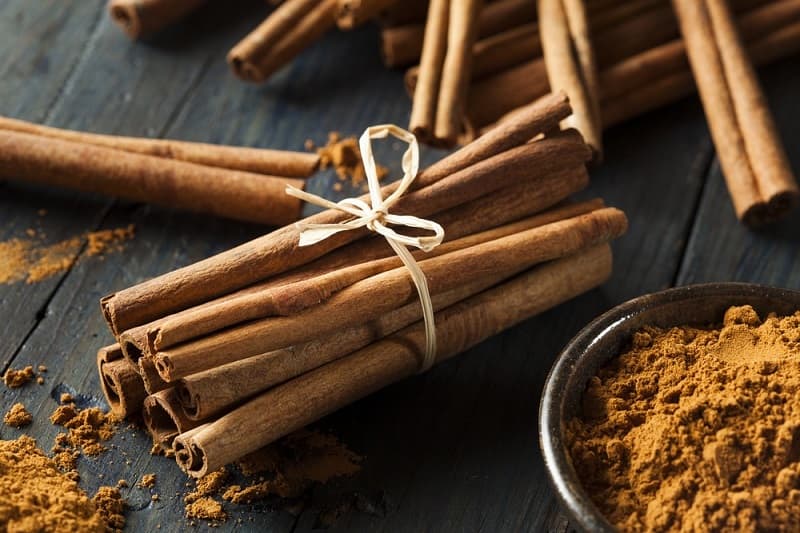 Cinnamon is a powerful spice that has been used medicinally around the world for thousands of years. The health benefits of cinnamon come from the bark of the Cinnamomum tree.

This bark contains several special compounds which are responsible for its many health-promoting properties- including cinnamaldehyde, cinnamic acid, and cinnamate.

One of the hottest weight-loss trends today is including honey and cinnamon in your daily diet. People use this combo in tea, eat it straight, or use it as a topping for cereal and other foods.

it contains antioxidants that reduce free radical damage and slow the aging process.

The health benefits of cinnamon are contributed by the type of antioxidants called polyphenols, phenolic acid, and flavonoids.

These antioxidants work to fight oxidative stress in the body, which can lead to disease formation when uncontrolled, especially as someone ages.

The different antioxidants present in cinnamon help to reduce a multitude of symptoms and diseases because they are free-radical-scavengers. its ability to reduce many forms of oxidative stress, including the ability to limit nitric oxide build up in the blood and lipid (fat) peroxidation, which can both add to instances of brain disorders, cancer, heart disease, and other conditions.

Cinnamon is known to have an anti-diabetic effect.

Diabetes occurs when insulin resistance occurs and poor glycemic control takes places and which leads to developing the inability to manage sugar (glucose) levels in the bloodstream.

Cinnamon can block certain enzymes called alanines which allows for glucose (sugar) to be absorbed into the blood. Therefore it has been shown to decrease the amount of glucose that enters the bloodstream after a high-sugar meal, which is especially important for those with diabetes. they help combat heart disease and lowers bad LDL cholesterol levels, which those with diabetes are more at risk for developing.

The antioxidants in cinnamon have anti-inflammatory effects, which may help lower the risk of heart disease, cancer, brain function decline, and more.

it lowers swelling and inflammation, it can be beneficial in pain management.

Cinnamon’s protective antioxidant property is that they can help defend the brain against developing neurological disorders, such as Parkinson’s and Alzheimer’s diseases.

It protects cognitive function and brain health is because it activates neuro-protective proteins that protect brain cells from mutation and undergoing damage.

Cinnamon contains so many antioxidants and anti-inflammatory compounds that reduce the effects of aging on the body and brain.

Health benefit of cinnamon is that it reduces several of the most common risk factors for heart disease, including high cholesterol levels, high triglyceride levels, and high blood pressure.

Cinnamon is a helpful blood coagulant and prevents bleeding by helping the body to form blood clots. It also increases blood circulation and advances bodily tissue’s ability to repair itself after it’s been damaged. This includes heart tissue which is in need of regeneration in order to fight heart attacks, heart disease, and stroke.

Cinnamon is used in many cultures to naturally help fight harmful infections and viruses.

Cinnamon is so powerful at boosting immunity that some studies even show that it may be able to reduce the risk of contracting the HIV virus.

Because of its antioxidant abilities, cinnamon can protect against DNA damage, cell mutation, and cancerous tumor growth.

Cinnamaldehyde is compound present in cinnamon which has ability to inhibit cancer tumor growth and protect DNA from damage, while also encouraging cancerous cells to self-destruct.

Extracts of cinnamon act as a protective agent against bacteria living in the oral microflora that could cause bad breath, tooth decay, cavities or mouth infections.

Essential oil from cinnamon acts like a natural anti-bacterial mouthwash.

Cinnamon essential oil is also used in some beauty products, shampoos, and perfumes for its many health benefits that can help with fighting infection while adding a pleasant smell.

Cinnamon has anti-biotic and anti-microbial effects that protect skin from irritations, rashes, allergic reactions, and infections.

Cinnamon and honey, another antimicrobial ingredient, are frequently used together to boost skin health for this reason and are beneficial for acne, rosacea, and signs of skin allergies.

Cinnamon Used as Sweetener in Recipes:

Natural sweet taste of cinnamon can help to cut down on the amount of sugar.

Cinnamon already has anti-diabetic effects that slow sugar from releasing into the bloodstream which can help manage food cravings and weight gain but using cinnamon for its taste is another added benefit.

can be used in coffee, tea, baked goods, yogurt, on fruit, or in oatmeal instead of adding extra sugar and calories.

It will help to reduce inflammation-causing sugar, extra calories, and to fight weight gain, candida, diabetes, and low energy levels.

Help To Prevent or Cure Candida:

Cinnamon’s powerful anti-fungal properties may be effective in stopping or curing Candida overgrowth in the digestive tract. Another health benefit of cinnamon is that it helps to control blood sugar levels, and too much sugar within the digestive tract is associated with increased candida risk.

Cinnamon helps to fight candida naturally by boosting immune health and fighting inflammation, auto immune-reactions, and yeast within the gut.

Cinnamon can be used to preserve food. Because cinnamon has anti-bacterial abilities and also acts as an antioxidant, it can be used as a preservative in many foods without the need for chemicals and artificial ingredients.

Cinnamon plays a part in the action of tyrosinase inhibitors, which are useful in stopping discoloration on fruits and vegetables that appear as they oxidize and begin to rot.